Back from the windswept Canary Islands 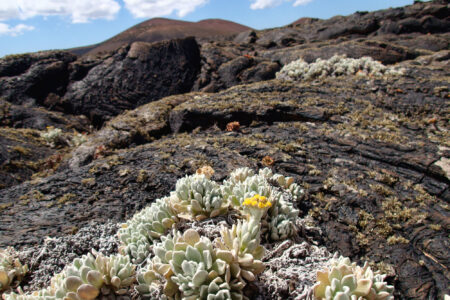 The heroic Helichrysum gossypinum on the barren lava fields of central Lanzarote.

So here I am, back in front of the screen after a month long Atlantic pause among the windswept Canary Islands. I was computerless, a strange and unfamiliar sensation and also a real pity as there would have been a very great deal to write, of courtesy and chaos, of tenacious plants bringing life to new stone and millennia of intense desertification at the hand of man, of life-giving mists caught and held close by deep green almost-tropical forests and boundless black and barren lava fields stopped only by the cold inhospitable ocean. So much of all this is already losing the sharp contours of immediacy, but in the next few weeks (or months), I’ll be fishing for memories among the sinuous recesses of my mind, with the help of the more than 2000 photos I’ve still to process. I say photos, but perhaps snaps would be a more accurate word as photography is for me a solitary pursuit in which I was able to indulge only sporadically on this trip in the company of my husband. And that’s fine, because seeing the world directly, without that technical filter of metal and glass, is often the best way to bring new vision to tired and often jaded eyes. There are a whole lot of things I’ll be missing, but on the whole… it’s good to be back.

PrevPreviousCold winds and the first orchids

For my Italian-speaking friends (or anyone wanting to translate into another language), I recommend DeepL translator available clicking here or also as a browser extension for Google Chrome.

sarah gregg - lynkos - eresus(at)lynkos.net
Cookies
Like just about every website in the universe, this site uses cookies to store and/or access device information. It's up to you whether to accept these cookies or not, but be warned... if you don't accept, strange things may happen!
Manage options Manage services Manage vendors Read more about these purposes
View preferences
{title} {title} {title}