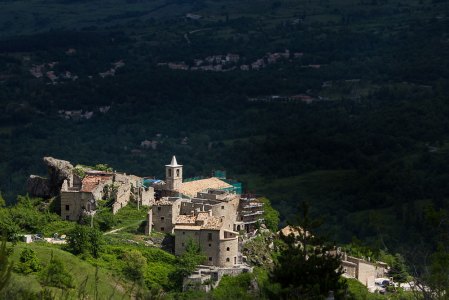 Roccacaramanico is a tiny village in the heart of the Majella National Park in Abruzzo, Italy. It is also where I live. It rests on the last of a line of rocky outcrops in the upper valley of the Orta river, here newborn. From the square, your gaze skims the Morrone on one side, caresses the Majella on the other, then slides freely down the entire valley as far as the sea and the Gran Sasso mountains in the distance. It shares its history with most of the small villages in the hinterland of Abruzzo (and not only). 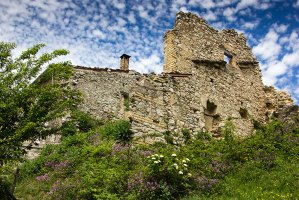 People lived (well or badly it’s not for me to say) from what they obtained from the land, then when that wasn’t enough, they left… for the city, abroad, wherever live was less hard and there was more to eat. And when all is said and done, who can blame them.
Nature gave a sigh of relief and winter after winter, the walls of the abandoned houses became old and crumbly. Then gradually new people arrived, inhabitants not through necessity of birth, but by choice (even though often by force of circumstance present only during the weekend or summer). Now most of the houses have been restored and tourists flock from all over Italy (or rather, from all over the world) to admire this jewel of a village, set “in the heart of unspoilt nature”.

I suppose this is a good thing. Yes, it must be, everyone says so. But I have a bigger dream for Roccacaramanico (or Rocchetta as it is known to its friends). Not just a museum of itself to be visited and admired, but an alive village where people can live and, thanks to the new technologies, also work. The perfect place to negotiate and communicate a new equilibrium between man and nature. It could well happen. In the meantime, when the tourists reach my gate and (a little out of breath for all the steps) ask me how I can live cut off from the world, I answer with a smile… and if on the other hand this were actually the world? I think my neighbour the fox would agree.